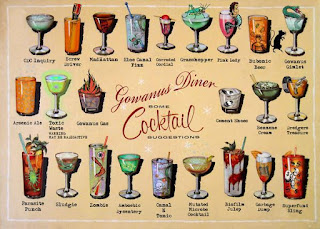 I really like this art created here that combines my love for a classic diner placemat with some Brookyn satire.  I totally would still order the Pink Lady, y'all.

#thegowanuscanalhasgonorrhea
Posted by WonderGirl at 8:49 PM No comments: 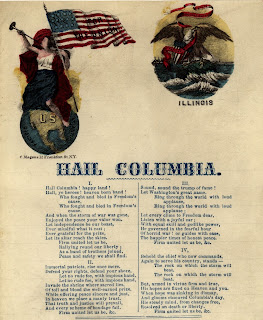 This is part of Ben Paris Cocktails Vol I.  These were some of the drinks on our opening menu almost a year ago.  I just had my workaversary with Columbia Hospitality and though this first drink I created for Ben Paris would be a good place to start.

In 1798, Joseph Hopkinson rearranged and wrote new lyrics to "The Presidents March", itself written and performed at George Washington's inauguration, for the song Hail Columbia!  Hail Columbia was one of the unofficial national anthems of America until "The Star-Spangled Banner" was named so in 1931. Hail Columbia is still played upon the entrance of the Vice President of these United States.

This one is for Uncle Joe. 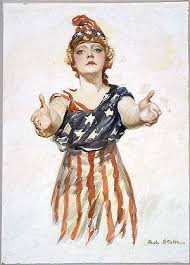 Buzzing with local Rosemary infused vodka, this sour unifies locally made Italian Amaro and limoncello and tangles it all up with Oregon Iris liqueur till you are floating on a cloud tufted with Seattle's own Sun Liquor Rhubarb bitters.  All Hail Columbia!
Vodka, Rosemary, Citrus, Iris, Limoncello, egg white

Posted by WonderGirl at 11:23 PM No comments:

Years ago I was honored by the Bitter Southerner, an on line Southern literary magazine, to create a cocktail that was variations on a theme, like a the Corpse Reviver series.  I created the Bitter Southerner no. 4 to be a bitter rum drink that had the look and feel of a Sazerac with strong Sicilian and Italian roots. 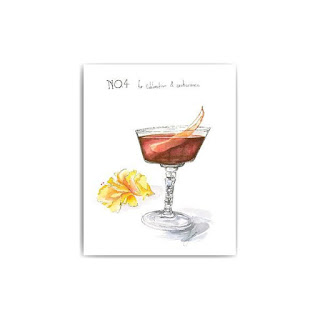 There were beautiful prints made of these cocktails based on the even more beautiful photographs by Pableaux Johnson.  And I used my Grandma Gullo's glassware that day so they are extra special representations of my craft.  Unfortunately, they sold out before I could get one.  Please, Bitter Southerner!  You didn't even pay me for my intellectual property!  Could you please send me a print of my work?  And one for Pableaux too?!?
Posted by WonderGirl at 2:12 PM No comments:

The word is out!  I have moved to Seattle to open a new project with The State Hotel.  Watch this sweet little space explode with new cocktails!  I have a lot of practice to do and have already started a weekly happy hour in the office.

Not a bad way to transition into 9-5 life.  Cue Dolly!

Posted by WonderGirl at 7:37 PM No comments:

This Happy Monday we talked about the Cherokee Rose and Bolivian Brandy.  I was so sure this drink was gonna be the hit with the Tales of the Cocktail crowd.  But that honor actually went to the Lucian Bacchanal.  Here I am.  Just ten years a head of my time again.

This drink bore out of a Vesper inspiration with Cocchi Rossa and contains a nice hit of salinity from a thyme and rosemary infused olive oil mixed with sea salt and hot water.  I bought these gold rimmed coup glasses just for this beautiful drink.
Posted by WonderGirl at 7:31 PM No comments:

Every Monday at 4pm we will be going over a cocktail on our menu, how its made, what inspired it and then do a tasting of the base spirit in said cocktail. This 20-30 minute class is free and open to the public! And the cocktail of the week will a $6 happy hour special at the bar on that Monday til 6pm!

Today we did the Lucian Bacchanal. This is a drink I invented under a different name 10 years ago.  The story of that first drink, where I was challenged by another bartender, is here.

Video of me making that drink can be seen below.  Please forgive the sloppy jigger work and silly hair toss.  I was but a baby bartender in a strange bar and had just gotten my hair did. Tell me...do you prefer my raven locks of hair, or my current curly strawberry blonde?

We discussed in class today how Chairman's worked great, but the Bounty Dark brings out a little more of that mezcal smoke.

Shake and strain into a cocktail coup/

*To make the "Abby's Mix" which is a play on Don's Mix form Tiki lore:

1:1 ratio by weight / Sugar : Water
1 :1 ratio / whole GF peel for “Abby’s Mix” : per cup of sugar
Peel the skin off oranges and place in a vacuum seal bag.  Add the appropriate amount of sugar to the bag.   (4 whole peels : 4 cups of sugar, 6 whole peels : 6 cups)
Vacuum seal the bag and let sit overnight.  (Write how much sugar is in the bag)
Next day add appropriate amount of hot water to sugar. (4 cups sugar : 4 cups water)


Stir to incorporate and take out left over GF peels.  Use immersion blender if necessary to dissolve sugar. **for Abby’s Mix include 2 cinnamon sticks and 3-5 anise pods per cup of sugar when you add the hot water

Well, as with many Tiki drinks...already we start with controversy.  Trader Vic's would like you to know that the real Mai Tai day, by proclamation of the City of Oakland, is actually August 30th.  It was on this date in 1944, according to them, that Vic himself crafted a rum drink using rock candy syrup, fresh lime, orange curaçao, and orgeat. His Tahitian friend exclaimed “Mai tai roa ae!” which translates to “out of this world!” Thus this most popular Tiki drink was created.

Indeed,  I say, there can't be enough days to celebrate this amazing drink.  So look for another post on August 30th.


Here is the other controversy.  Pineapple juice.  Let me here by proclaim that this post will be about the classic tiki Trader Vic/Donn Beach/ Beachbum Mai Tai, not a Hawaiian Mai Tai.  I went to Hawaii last year and can confirm their Mai Tais are quite different with the addition of both pineapple and passionfuit and a very dark rum float.  I think we need to approach this drink like a "New Orleans Daiquiri".  Its going to be different with its own regional flair, and I accept and embrace that....when I am in Hawaii.

But today I am in glorious New Orleans!  And am about to embark on a Mai Tai crawl through the French Quarter.  First stop is my home bar of Compere Lapin, natch.  Bartender James whipped me up the prefect Mai Tai to start my day.

Think of a Mai Tai as an orgeat Daiquri had a baby with an agricole Daisy.  The Daisy being lime, spirit and orange curacao; we are going to use Clement Creole Shrubb, to perfectly compliment the aged agricole, in this case, Rhum JM VO, aged at least 3 years.

The Daiquiri part would be lime, rum and sugar, in this case taking the form of orgeat, an almond rose water syrup popular in Tiki. With almonds and rose or orange water, it does indeed have it roots in the Mediterranean. It can be homemade if you are feeling ambitious,  but there are many fine pre-made versions available as well.

The rums, according to the drinks inventor, were to be from Martinique and Jamaica.  But we are creating a dry funky Mai Tai for a modern palate that would go well with the Creole Caribbean food of our Chef, Nina Compton.  She is from St Lucia, so we will surely use Bounty or Chairman's reserve from her home Island in place of the Jamaican Rum.

So have a Mai Tai today, August 30th and, indeed, every and any day in between!


Easy steps on how to Mai Tai on Mai Tai Day!

Just because the weather is heating up, it doesn't mean you have to forgo your Old Fashioned.  Spirit forward drinks sipped leisurely over big cool ice is actually just the thing for fighting off the blazing summer sun.  Especially if you use that elixer made from sugar cane in the tropics; rum.

And for those of you put off by the molasses heavy sweetness of traditional dark rums, I have the solution. Rhum Agricole.   Agricole is French, but from the Latin, agricola, meaning, ager (“field”) +‎ -cola (“-tiller”, “-cultivator”).  Indeed this Rhums are made with cane fresh from the fields, unlike the h-less rums made from molasses, a byproduct of sugar production.  The result is a dry, grassy and green spirit bursting with terroir and flavor.  When aged, in their tradition French casks, the result can be as fine as cognac with a Caribbean twist.

Rhums from Martinique are labeled "AOC Martinique Rhum Agricole" because French and European law allowed a designation called "Appellation d’Origine Contrôlée" (protected designation of origin) for rums produced on the island of Martinique.  That means both the quality of the production and the workers on that Island get the protection of putting out a quality product with quality wages. This is a feel good drinking rhum inside and out!

So order an aged rhum agricole Old Fashioned from your next cocktail bar and keep the Don Draper in Martinique vibes all summer long!
Posted by WonderGirl at 6:00 PM No comments:

Tail of the Tweets

Contact RyeGirl for information on fine liquor tastings and special cocktails for your special event.

Before I could drink Manhattans..

WonderGirl
Here's to a life filled with love, alcohol and clothes on the floor.